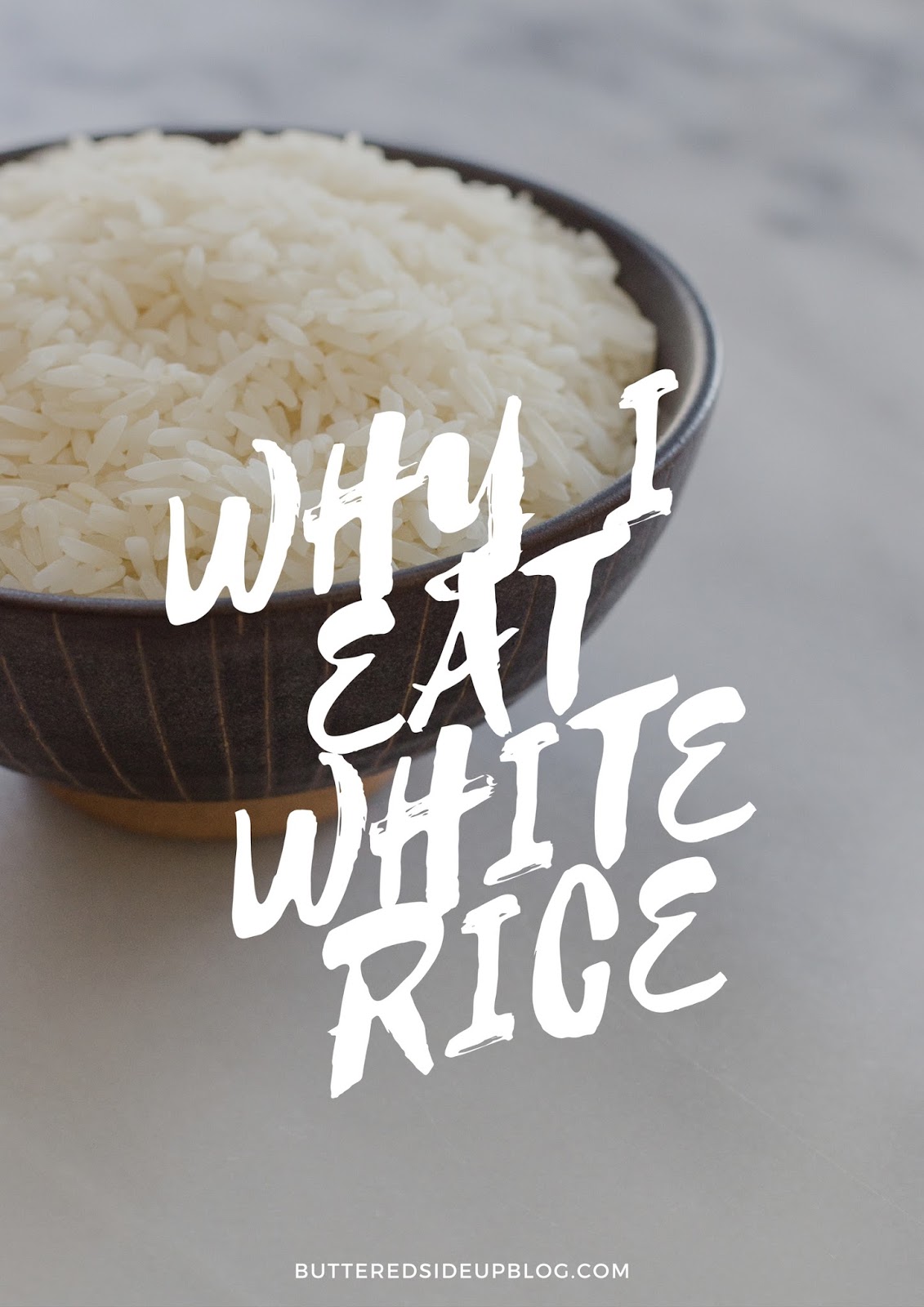 This may come as a surprise to you, but I never cook brown rice. Like, ever. Instead, I cook and eat WHITE rice on a regular basis.
Now, you may wonder why I would eat something nearly every week that many of  the health-conscious crowd would consider Satan in food form.
Well, I have FIVE reasons why I eat white rice instead of brown rice: 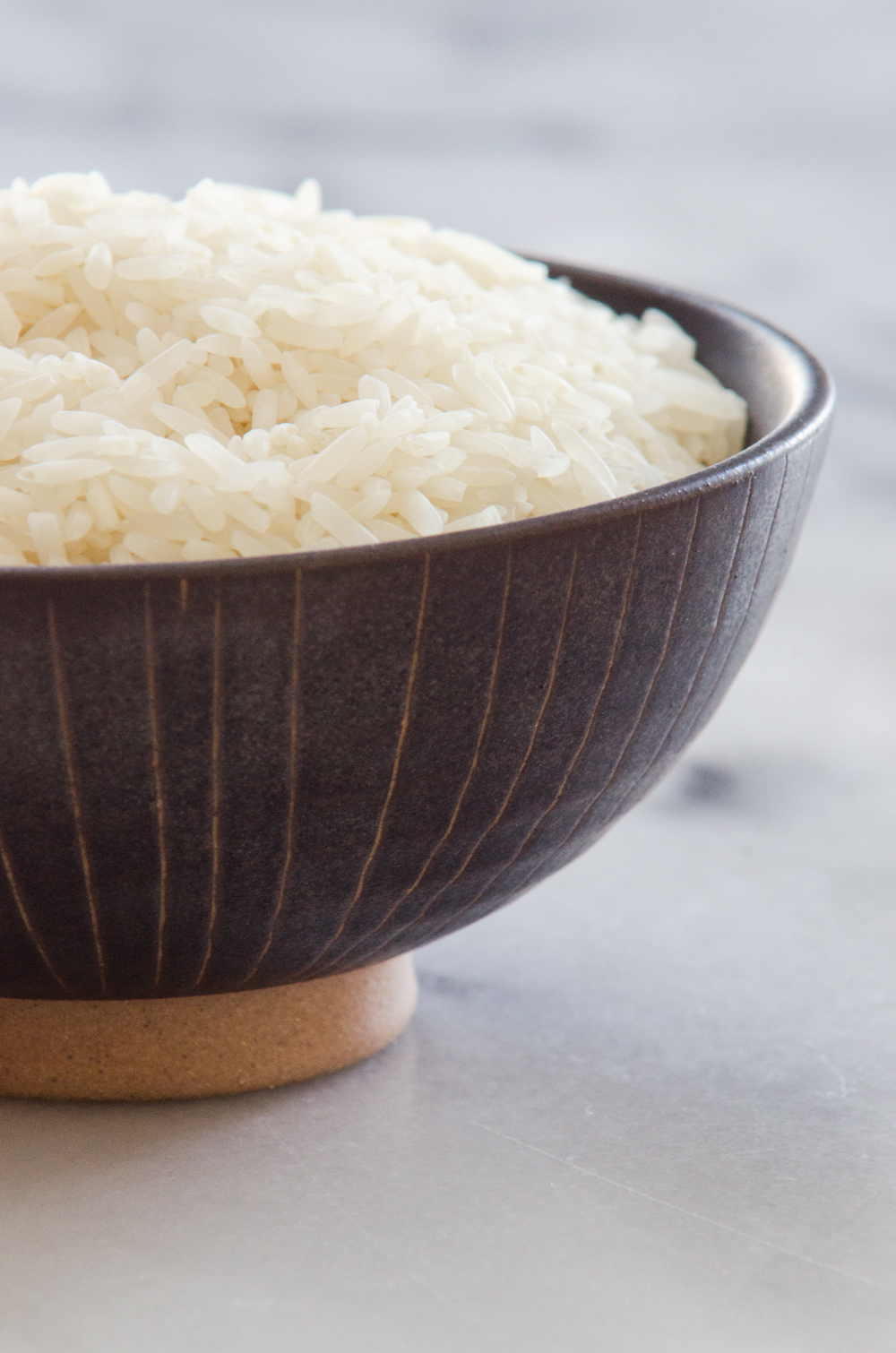 As I’ve mentioned before, phytic acid is an anti-nutrient found in most nuts, seeds, legumes, and grains. It binds with certain nutrients, preventing them from being absorbed.

White rice is much lower in phytic acid than brown rice (Source). This is because most of the phytic acid is found in the bran of rice, which is removed when making white (AKA polished) rice.

Yes, brown rice is much higher in vitamins and minerals than white rice. But because brown rice contains high levels of phytic acid, the benefits of these nutrients are somewhat negated.

EDIT: I forgot to mention that it is possible to remove almost all of the phytic acid in brown rice using the method outlined at the bottom of THIS post.

2) WHITE RICE IS LOWER IN ARSENIC

According to consumer reports:

Brown rice has 80 percent more inorganic arsenic on average than white rice of the same type. Arsenic accumulates in the grain’s outer layers, which are removed to make white rice. (Source)

Arsenic is a carcinogen (causes cancer), and studies show that it may cause other health problems such as diabetes, neurological effects, cardiac disorders, etc. (Source)

To avoid arsenic in rice, this is what Consumer Reports recommends:

White basmati rice from California, India, and Pakistan, and sushi rice from the U.S. on average has half of the inorganic-arsenic amount of most other types of rice.

Brown rice retains its natural oils which are contained in the bran and germ. This makes brown rice susceptible to going rancid. I know rice that I have stored has definitely gone off.

The shelf life of brown rice is only about 3-6 months (Source, Source). Unless you know how long that bag of brown rice has been sitting on the grocery store shelf, you could potentially be eating gone-bad rice.

4) BROWN RICE HAS A HIGH RATIO OF OMEGA-6

Also, brown rice oils have a high ratio of Omega-6 fatty acids (Source). Western diets tend to be too high in Omega-6 fatty acids as it is, so you don’t really want to be adding any more than you can help. You can read more about Omega-6 vs Omega 3 here, here, and here.

Since the bran and germ are removed to make white rice, the oils are removed as well. That way you can decide what kind of fat to consume with your rice.

This is totally a matter of opinion, but I personally enjoy the way white rice tastes much better than brown rice. Brown rice flavor doesn’t bother me, but it doesn’t really thrill me either. Also, and more importantly to me, the texture of brown rice is inferior to that of white rice.

Whereas brown rice contains more nutrients than white rice, the fact that it is high in phytic acid, arsenic, Omega-6, and is possibly rancid outweighs those nutrient benefits.

I think of white rice kind of like a neutral starch: it doesn’t have many nutrients, but it isn’t going to do you much harm. Obviously, since it doesn’t have much in the way of nutrients, you want to consume it sparingly – you don’t want it to replace too many of the more nutrient-dense foods.

If you’d like to maximize the nutrients you get from rice, make sure to cook it in bone broth and serve it with PLENTY of grass-fed butter. Mmhmm.

NOTE: If you are trying to lose weight or struggling with diabetes or pre-diabetes, white rice might not be the correct choice for you.


How about YOU? Do you eat white or brown rice, or neither? What are your reasons?

Is White Rice Healthy? by Wellness Mama
Is Brown Rice Bad For You? by Holistic Squid
Why I Started to Eat White Rice by Mother Nature Network
Arsenic in Rice by FDA
All About Rice by Paleo Leap
Brown Rice or White Rice: Which is Healthier? by Butter Believer

I love white rice ! In particular jasmine and basmati, my granddaughter and I eat it a couple times a week actually I keep 2 cups cooked in the refrigerator so she can warm it anytime she wants it. I am not a fan of brown rice.

I actually switched to cooking white rice because of my dog. He was diagnosed with kidney disease last year and it's lower in phosphorus than brown rice. That's another benefit of white rice you might want to sneak into your article ;)

To reduce the arsenic by up to 80%, I soak it overnight, drain, rinse and overcook (this makes it more digestible) the next day, draining and rinsing well again.

I agree it doesn't have much going for it nutrition wise. It took me a long time to get over leaving brown rice behind though! I've finally managed to with all that I've learned about anti-nutrients, too much fibre, etc. I'll probably start eating it again myself because I do LOVE it! Brown rice I tolerated because I thought it was better for me.

When I feed it to my dog, I make sure he's getting nutrient dense food as well (organ meats).

@Sheila, That’s good to know as I have too much iron - it’s a blood condition - so I’m always looking for ways to lower or block iron absorption.

Lynn, she said that rice blocks the absorption of iron, which are in organ meats. White rice has less of the blocking chemical (phytates) but still enough to stop it. You should serve rice and iron-rich foods at least 2 hours apart from each other,

Thank you, such a sensible post! I will stick to white rice, so much better taste, low omega-6 and now your added benefits! That so many people consider themselves health professionals and advocate for brown rice (and massive omega-6 intake) makes my mind boggle worse than brown rice in my belly 😆

What kind of rice do you usually buy and where? Thanks!

Thanks! I agree, white tastes better. A number of years ago we only ever ate brown. Then we did a rice challenge that meant as a family we only ate rice for a week, so we could sent the money that we saved on food to those that need the money. After that we were so sick of rice for a long time. It was only when I tried white basmati rice that we could actually enjoy it again. We have been eating only white for 3+ years and I think that we are ok food wise!

That is an amazing thing to do! But I can definitely see how you would get sick of rice. Haha! :)