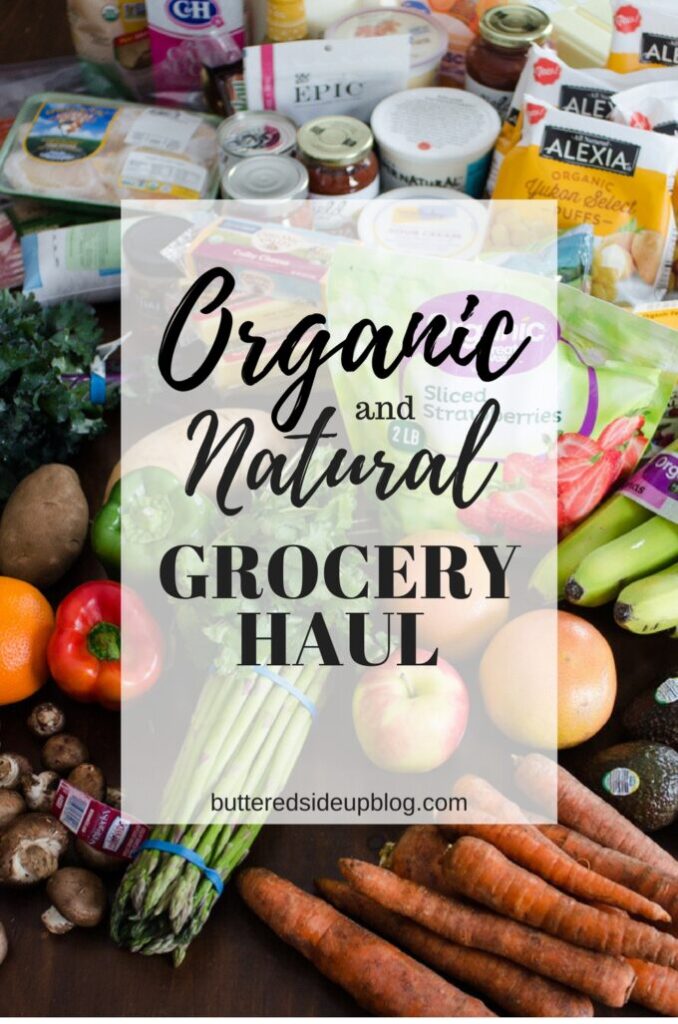 So, how’s Sugar Free January going for all of you that are participating? I’m feeling great, besides FINALLY succumbing to the cold that’s going around. I need to be more on it with my cod liver oil/emu oil/vitamin D supplements. I had a bit of a sugar craving attack last week, but I made it to the other side and it subsided. I did make a couple of accidental/planned “cheats”, but they were pretty minor. I’ll talk more about them in another post.

But on to this organic/natural grocery haul! 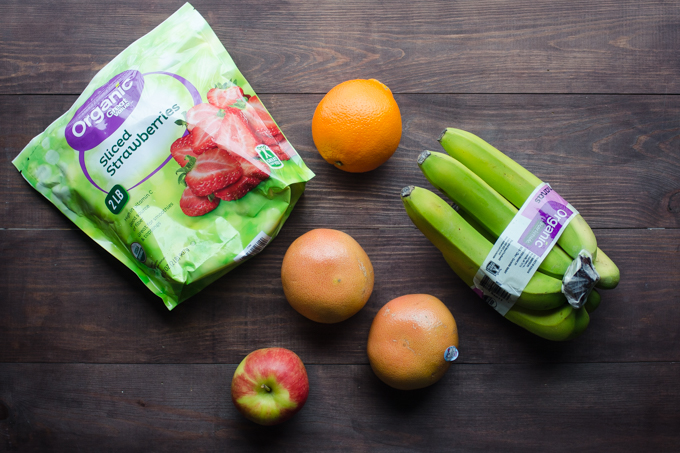 The organic frozen strawberries and bananas and conventional grapefruit were from Walmart, and the organic apple and orange were from our local health food store (HFS). I’m okay with buying non-organic grapefruit because it’s on the Clean 15 list. 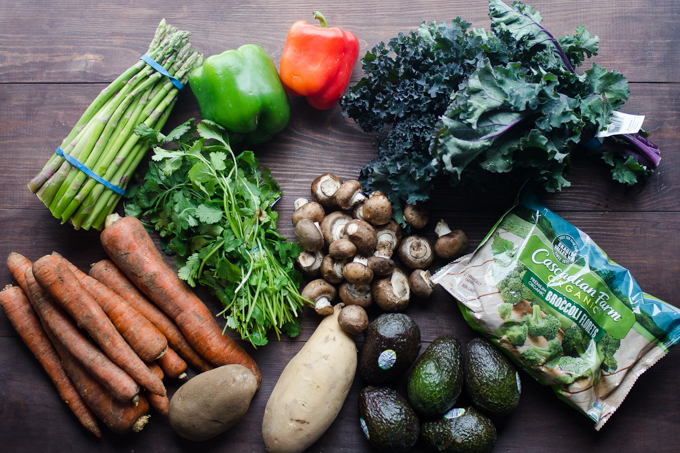 Everything was from the HFS: Asparagus (can’t remember if it was organic or not, but it’s also on the Clean 15), local carrots, and the rest was organic: bell peppers, kale, frozen broccoli, avocados, crimini mushrooms, sweet potato, russet potato, and cilantro. 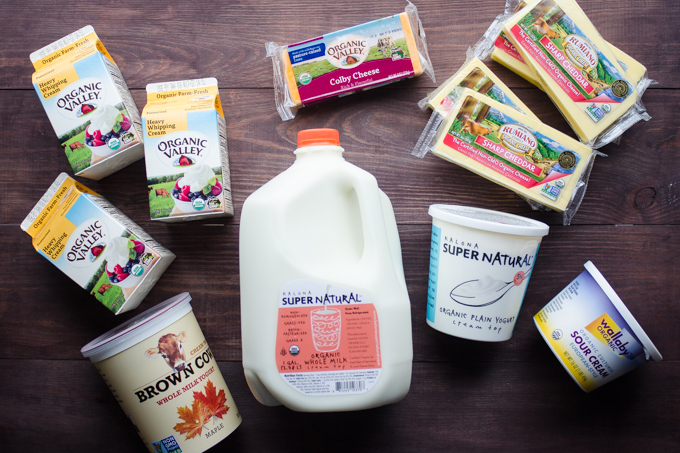 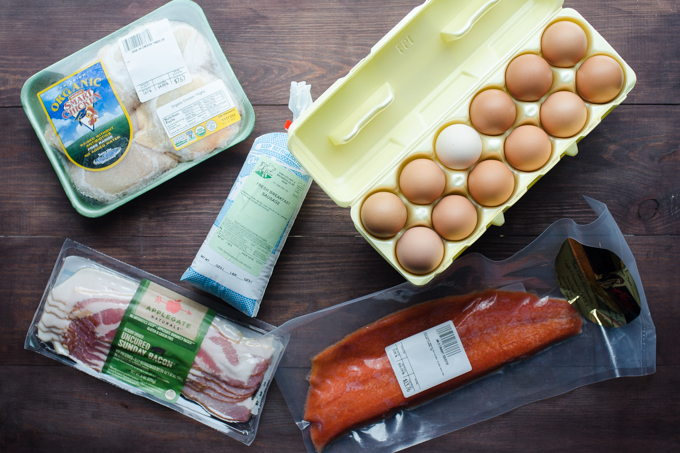 Organic chicken thighs, local breakfast sausage (sugar free!), local eggs, wild-caught salmon, and Applegate Naturals uncured Sunday bacon. This bacon does contain sugar, but it was the best I could find, and it’s less than 2%, so I’m okay with it. I was hoping to buy this brand instead, but our HFS stopped carrying it for some reason! And it was my favorite bacon! Boo! 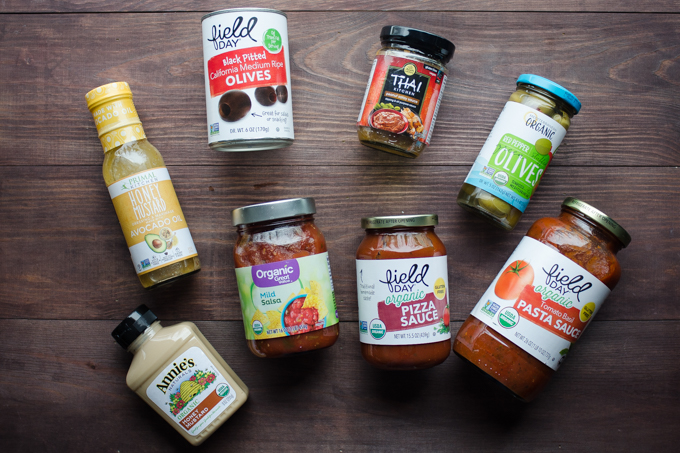 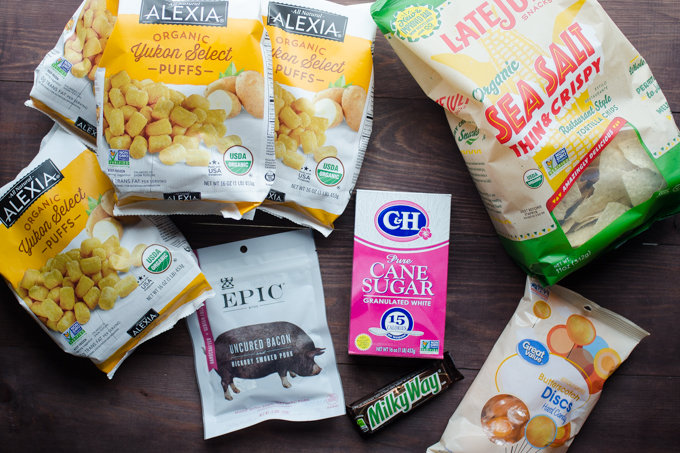 Finally, some “junk” food. Do you guys know how much it hurt me to buy candy and sugar?! But I needed it for a post.

The Epic uncured bacon and organic Alexia tater tots and Late July tortilla chips were from the HFS and the cane sugar, “butterscotch discs,” and Milky Way candy bar were from Walmart. I’m thinking I’ll save the hard candy for next Christmas and make stained glass windows for gingerbread houses from them? They were only 98 cents, so it wasn’t a big loss. Reuben ate the candy bar in his lunch, and said that it was sickeningly sweet. I might gift the sugar to someone who will use it. 🙂

So that’s what we bought for groceries last week! We spent a grand total of $214.34. But, to put it into perspective, we only spent a little over $100 the previous week. Our bill was so high because I had to buy some specialty items for blog posts.

Reuben and I have decided to set ourselves a monthly grocery budget in 2018. We’re in the very beginning stages of planning for a house, so we need to be mindful about our spending. Our goal is to only spend $800/month on groceries, or around $200 per week. Since we went over $200 last week, I made sure we spent less this week. I think it will all even out and hopefully we’ll stay under budget! We have NEVER kept a budget before, so this is all new to us. 🙂

Do you keep a budget for your groceries, or do you just wing it?

Keeping up with my no sugar January. I have made some minor mistakes but getting back on the bandwagon as soon as I can. It was funny - last night I was looking for a late snack and grabbed some homemade applesauce.....that applesauce was sooooooo gooooood!

Love your attitude of not giving up because of a little mistake! :) It's really hard to make zero mistakes. For example, Reuben was eating up some leftover mushroom gravy that I had made before I started Sugar Free January, and I took a bite. I totally forgot that I had made it with Worcestershire sauce which contains sugar! Not a huge slip-up, but still. Haha!

I'm only a little more than a week into my no sugar month. I started late because my family always celebrates Epiphany together, so I decided I'd just start after that weekend. It's going better than I expected though!

That's awesome! So glad you're on this journey with me. :)

Erica, Hi! The Brown Cow maple yogurt is great! I may have to reread this post at another time to get ideas for more organic shopping and cooking! Keep up the awesome posting! (IG follower @barbie62)