These sourdough cinnamon rolls are filled with yummy cinnamon sugar and have a delicious cream cheese icing on top! 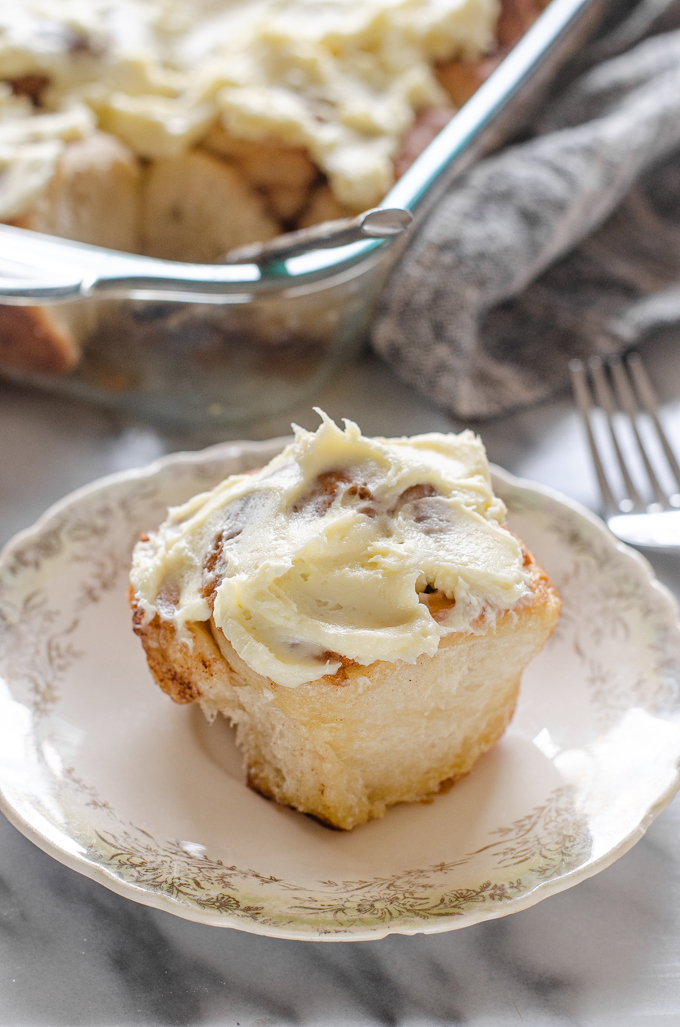 I’m betting we all have a cinnamon roll story.

For me, I experienced them in various ways growing up.

One of my older sisters would make cinnamon rolls from a tube for breakfast. I despised those.

Another sister once made “death by caramel rolls” (christened so by my dad) that had a deadly amount of sticky caramel. I loved those.

My mom would make cinnamon orange rolls, much to the chagrin of my citrus-hating dad. I cautiously liked them in spite of my dad’s aversion to them.

My grandma and aunts had their versions as well. They’ve been a staple breakfast treat throughout my life. Maybe it’s a Minnesota thing?

In any case, I think that sourdough cinnamon rolls bring something to the table that none of my previous cinnamon roll experiences had. The depth of flavor and softness that I can achieve from sourdough is different than fast-risen dough. Sure, they take more time and effort than “regular” yeast-risen cinnamon rolls. But it’s totally worth it in my opinion.

Okay, enough talk! Now let me show you how to make them: 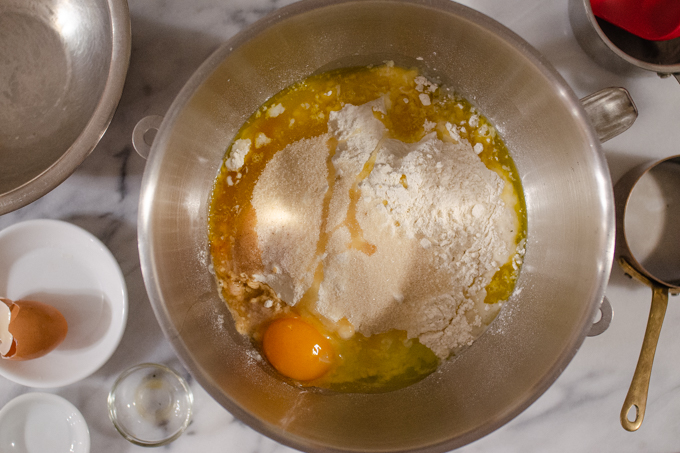 First, place all of the dough ingredients into the bowl of a stand mixer.

If you’re uncertain about what a sourdough starter is, make sure to check out my How to Make a Sourdough Starter From Scratch post. 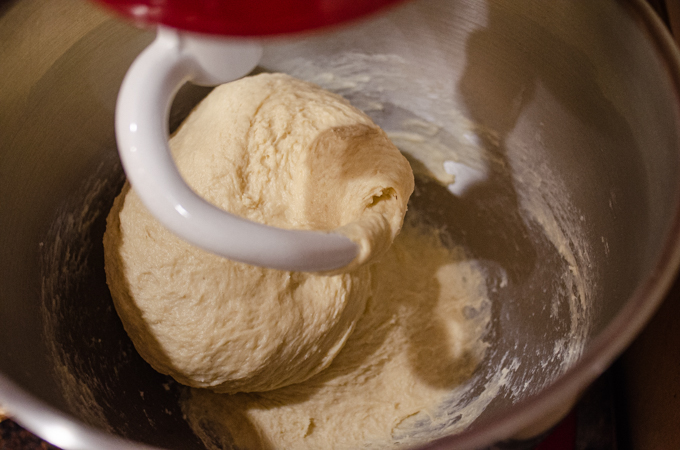 Then knead on medium-low with the dough hook for 10 minutes.

As you can see, the dough is quite soft and cleans the sides of the bowl, but not the bottom. This makes for soft sourdough cinnamon rolls. However, it does make the dough harder to work with. If ease of handling the dough is more important than texture, you can add just enough flour so that the dough cleans the bottom of the bowl.

Place the dough in a greased large bowl, cover, and allow to rise at room temperature for 8-12 hours. The amount of time it takes for your dough to rise will vary greatly depending on the temperature of your kitchen. In a very warm, summer kitchen in might only take 4 hours. In a very cool, winter kitchen it might take 12+ hours to achieve a doubling in bulk. 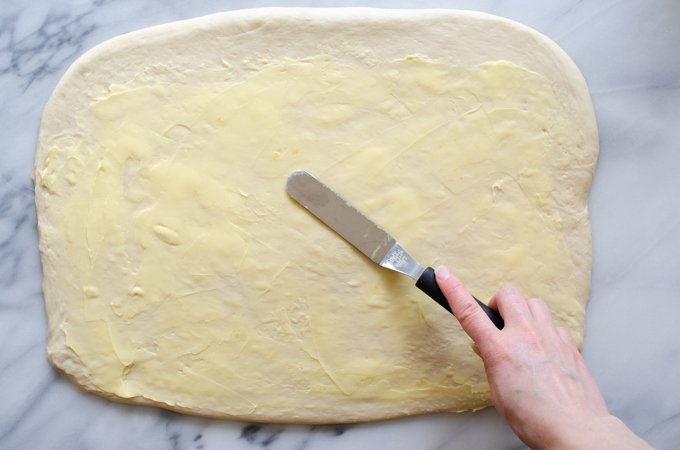 First of all, generously grease your work surface with butter. Because the dough is so soft, it can stick to the surface easily.

Now roll the dough out to a 16×12 inch rectangle with a buttered rolling pin.

Next, spread 4 tablespoons of soft butter over the surface of the dough, leaving about one inch of dough unbuttered on the far long end. 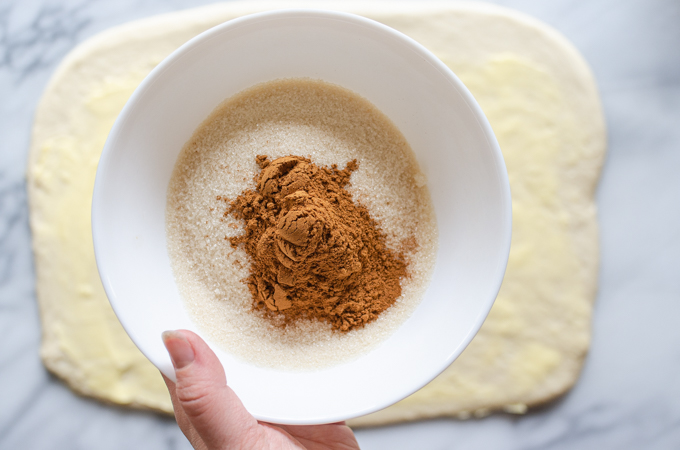 In a small bowl, mix together 1/2 cup of cane sugar and 2 teaspoons of cinnamon. 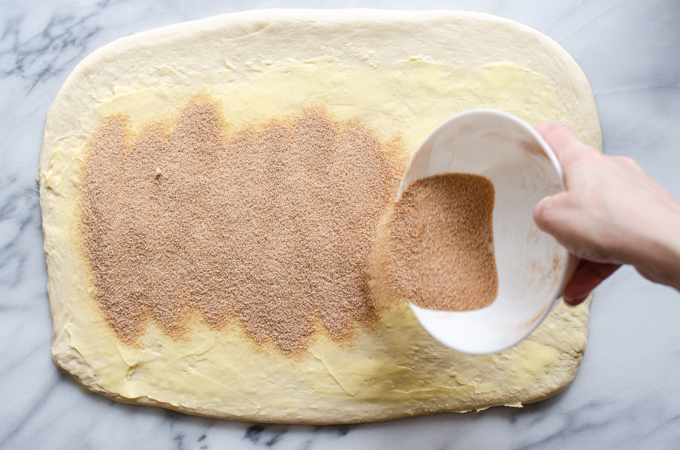 Then sprinkle the cinnamon sugar mixture evenly over the buttered dough. 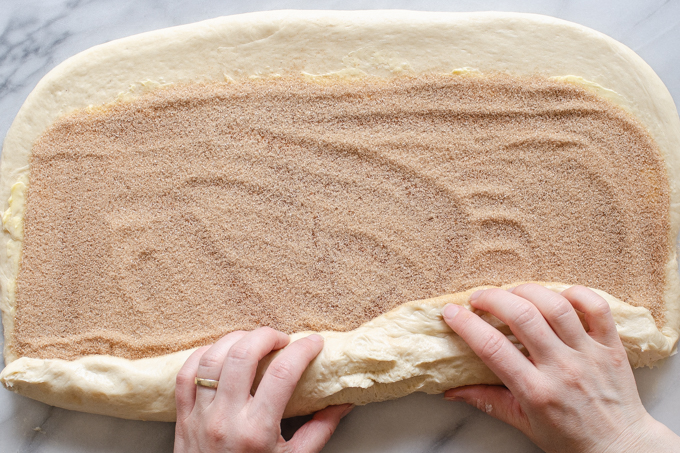 This is where the soft dough becomes difficult to work with. Again, if you don’t like fiddling with a soft dough, you can add more flour at the start. Just be aware of the texture difference! 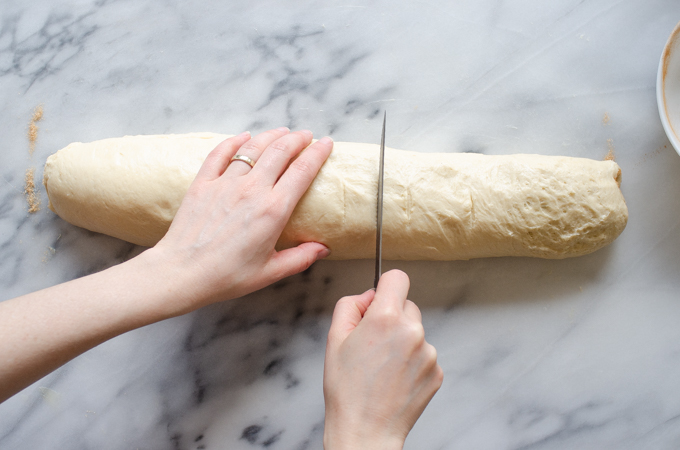 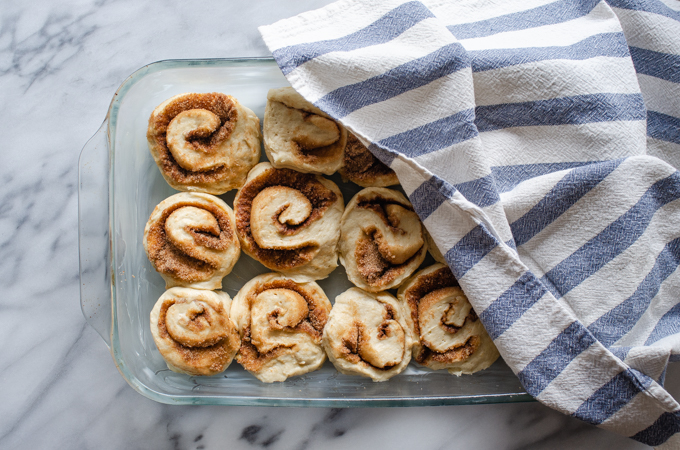 Place in a buttered 13×9-inch baking dish and cover with a tea towel. 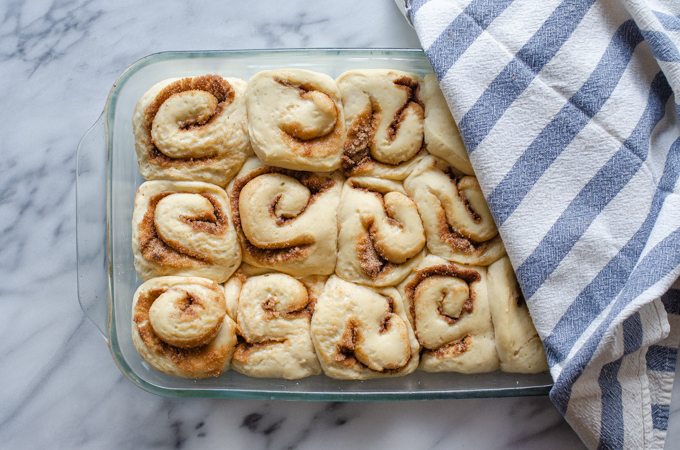 Allow to rise until quite puffy, about 4-8 hours (again, depending on how warm your kitchen is). 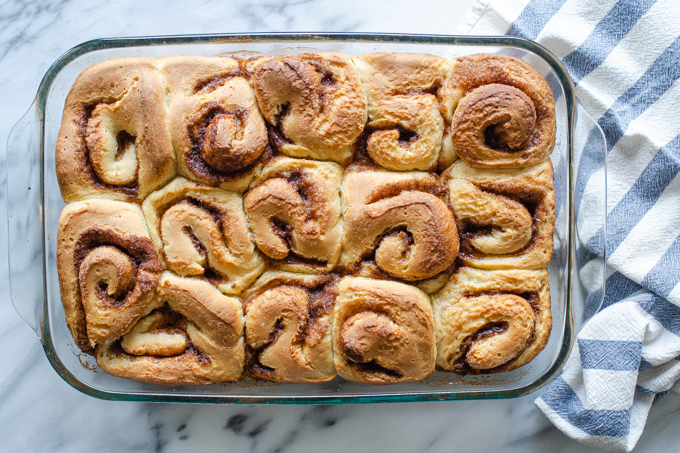 After the rolls have risen a second time, bake them in a 400 degree F oven for 10 minutes, then lower the temperature to 375 F and continue to bake the rolls for 20-25 minutes more.

The challenge with sourdough cinnamon rolls is to get them done in the center. So it’s really helpful to use an instant read thermometer to check for doneness. Insert it into the doughy park of a cinnamon roll. It should register between 195 and 200 degrees F.

Remove pan from oven and allow to cool on a wire rack for about 20-30 minutes.

Making the Cream Cheese Icing for the Sourdough Cinnamon Rolls: 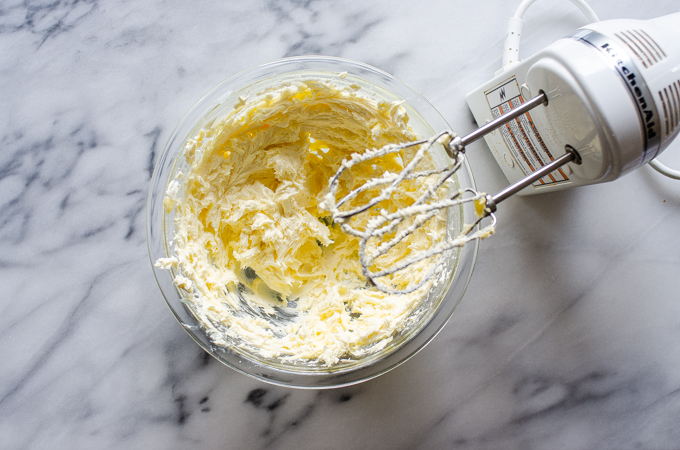 While the buns are cooling, make the cream cheese icing:

First, in a medium bowl, beat together 1 stick of softened grass-fed butter and 8 ounces of organic cream cheese. 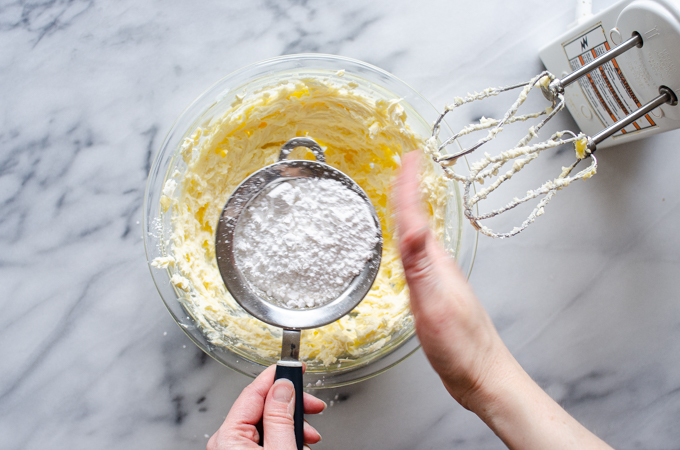 Next, sift 1/2 cup of organic powdered sugar over the bowl and beat until smooth. 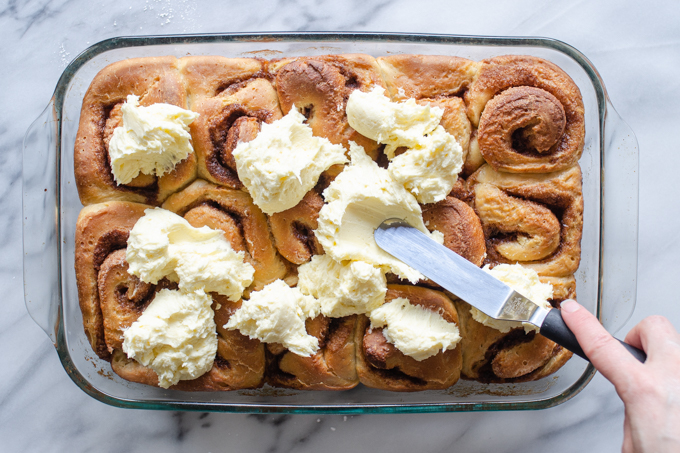 Then dab the cream cheese icing all over the sourdough cinnamon rolls. 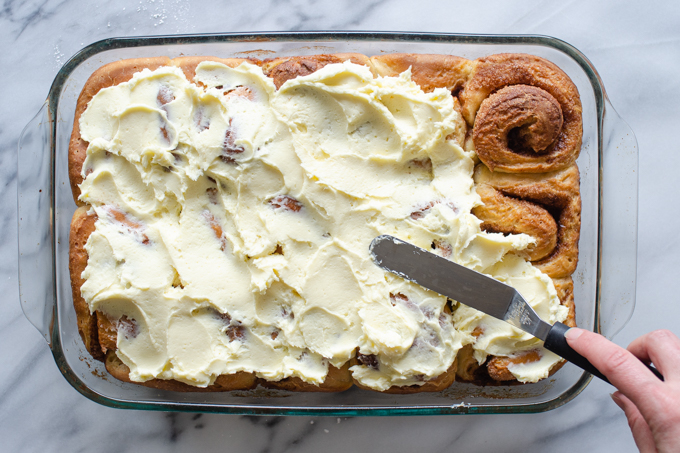 Spread it out evenly. 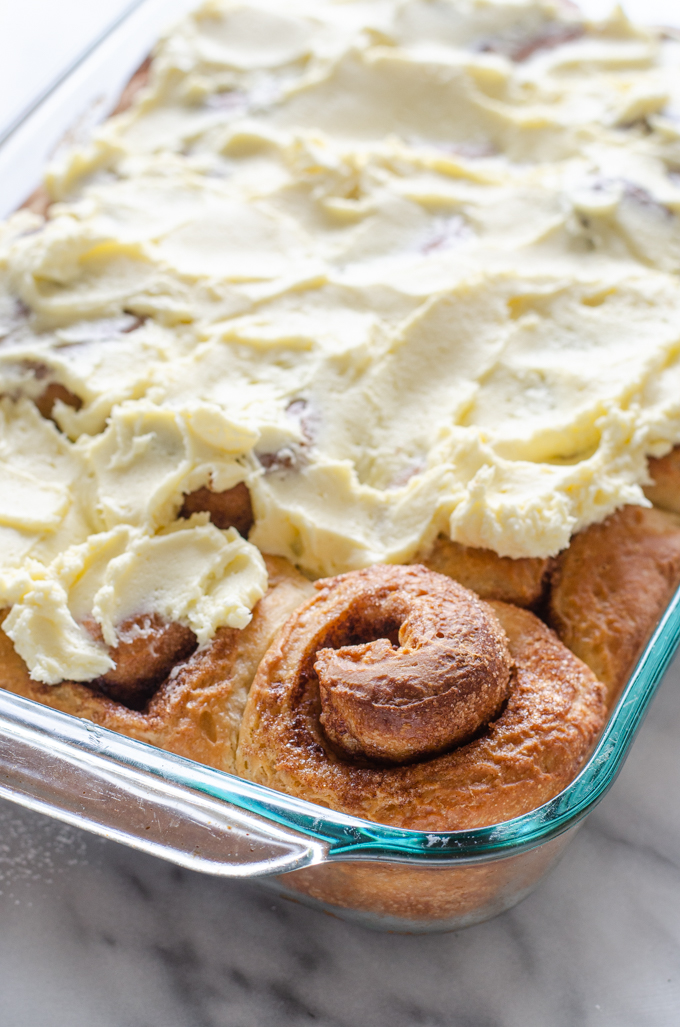 The reason you want to wait to ice these until they’re cool is because the icing is made with butter and cream cheese. It will melt if you rush things. But of course if you’re impatient, you could make a powdered sugar-based icing instead. However, the cream cheese goes really well with the sourdough. 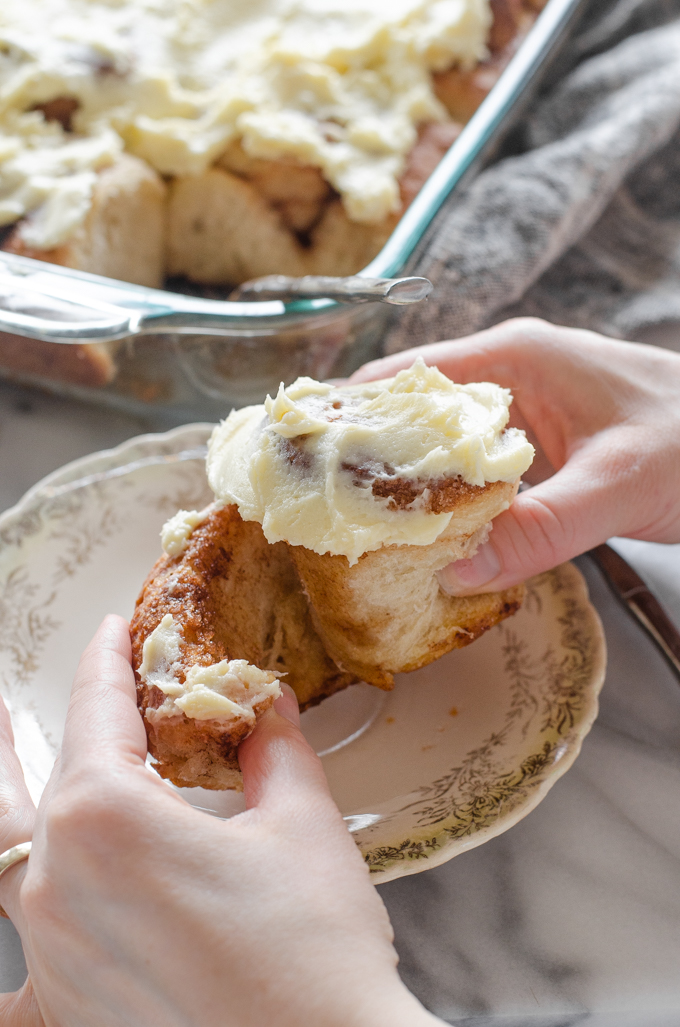 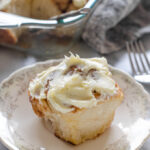 These cinnamon rolls are made with wild yeast and a cream cheese frosting!

Very fluffy on the inside, with a nice crunchy exterior. Also loved the slight tang from the sourdough, and the icing had the perfect amount of sweetness (but I do like things less sweet than some).

Thanks so much, Erica!

So happy you enjoyed them! I'm the same - too sweet and I don't enjoy it!

I have a question! For the final rise (4-8 hrs), is it possible to place my rolls in the refrigerator for about 8 hours? (Thinking overnight for a fresh morning roll)

I love this recipe thanks Erica. My family are not keen on cream cheese so I just mix icing sugar and water and drizzle over the top when cool. I am wanting to make a savoury ham and cheese version. Could I remove sugar from dough or reduce it or do you have another recipe for this? Cheers, Rachael

So glad you enjoyed it, Rachael! Another really yummy icing I've made uses browned butter, powdered sugar, and milk or cream. SO good. Ooooh...a savor ham and cheese version sounds amazing! Yes, you should be able to leave out the sugar or reduce it since sourdough doesn't require sugar to "activate" it. Though if the dough was a little bit sweet, it might be a nice contrast to all the other savory flavors. Hmmm...now I want to experiment with it myself!

Erica, Thanks for more sourdough recipes. Sourdough totally tastes way better than regular bread recipes. I am planning on making these for my Grandma. I have so many Cinnamon Role memories. They where the first thing my Auntie taught me and my sisters to make. We had such fun in her kitchen on cold snowy nights baking away. God Bless, Kristen

I totally agree! My husband and I say that when I make the sourdough version of something, it's always (or nearly always) better! That's cool that your aunt taught you and your sisters how to make cinnamon rolls! That sounds like so much fun.