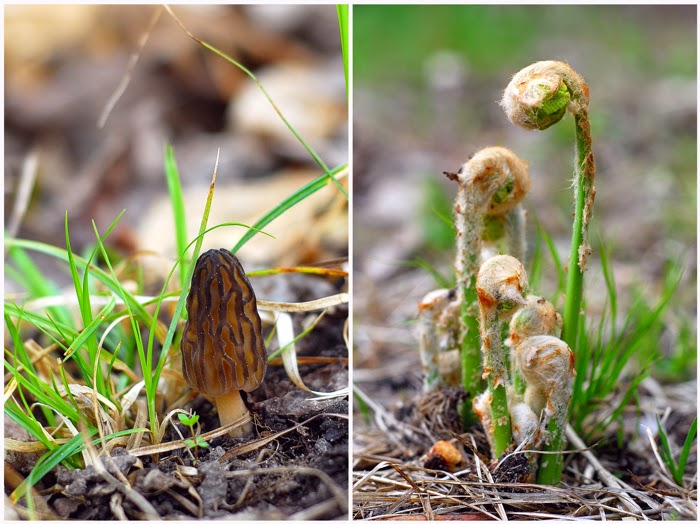 This post was first published on May 7, 2010 on Cooking for Seven. I always considered it some of my best work, so of course I wanted to share it here on Buttered Side Up. I also included the original comments because there was some good conversation and suggestions for cooking morels… 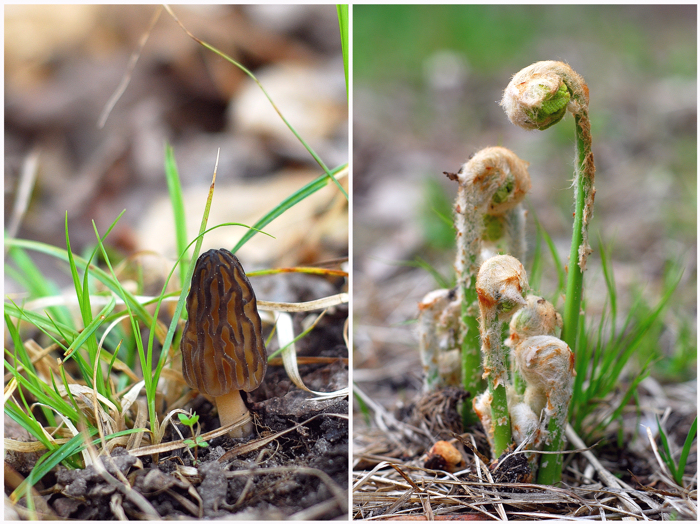 Each spring, around the time of opening fishing, when the ferns begin to pop up, we head out with our mesh gathering bags to hunt for morel mushrooms. We have a special spot down the road that is nearly guaranteed to give us a few of these delectable little fungi. 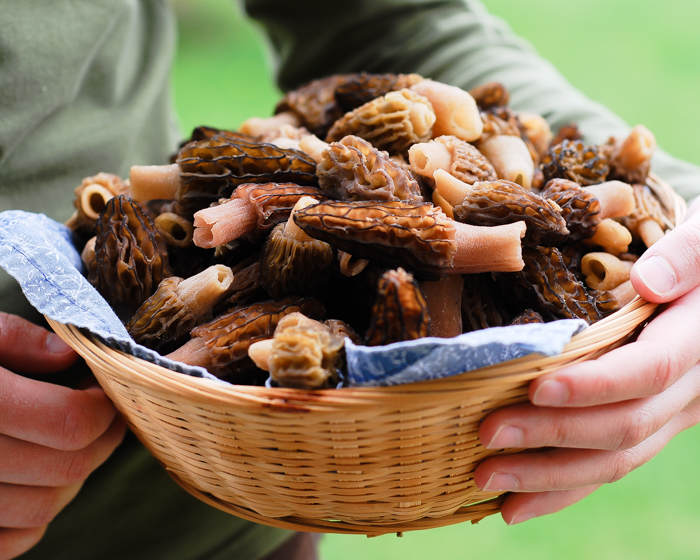 Yesterday, about an hour before supper, I decided it was high time we visited our secret hunting ground. We spent about half an hour of careful search & brought home enough mushrooms to complement our dinner. 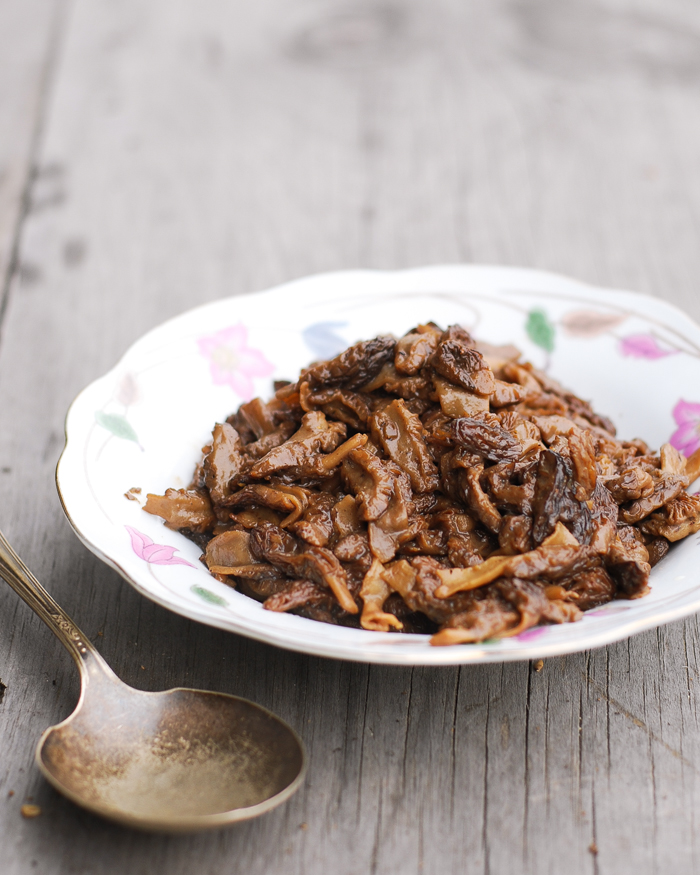 So if you find yourself with a few of these precious mushrooms, please: eat them plain, cooked in butter & seasoned with salt and pepper. Don’t put them in a soup or pasta dish. They are far too good by themselves. Or with bleu cheese. Yes — Bleu Cheese!

1) Cut the mushrooms in half lengthwise & remove any dirt or bugs.

2) In a medium skillet, melt a generous amount of butter. Add the mushroom & season with salt & pepper to taste. The mushrooms with release their “juices” and the skillet will become saucy.

3) Cook until most of the liquid is gone & the mushrooms begin to darken. Transfer to a serving bowl and eat/devour immediately. 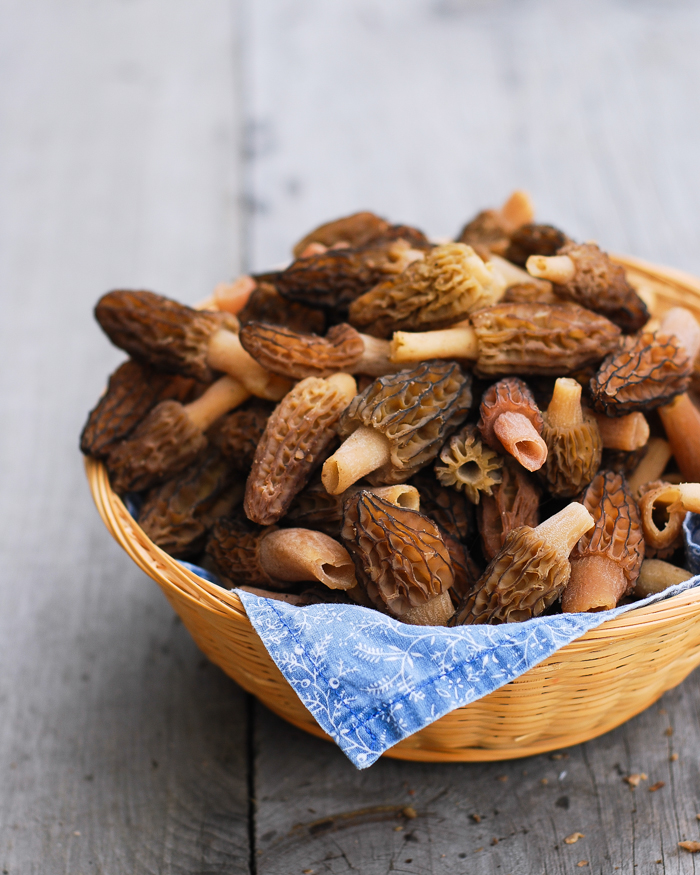 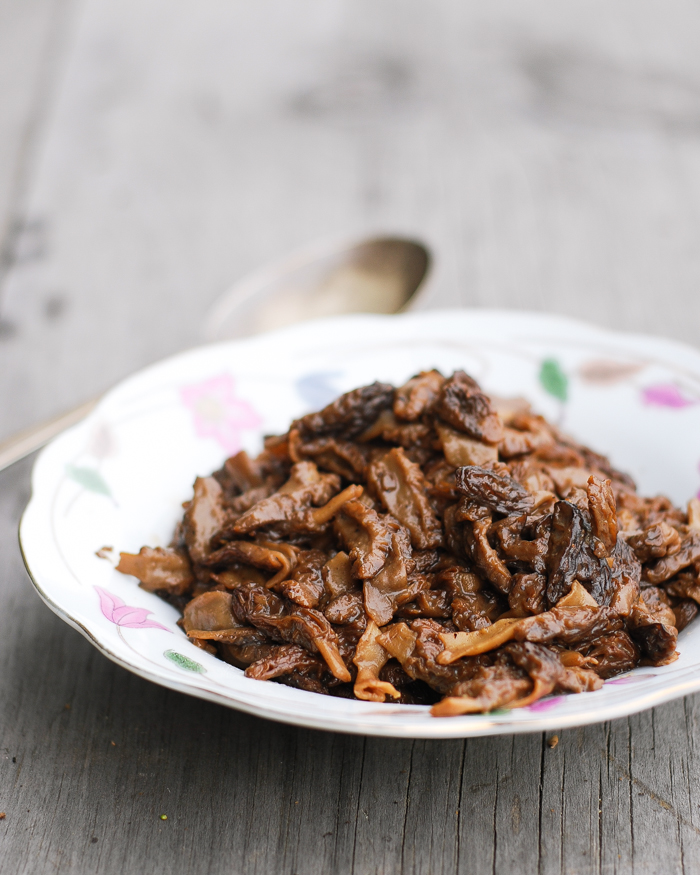 Maria says:
May 7, 2010 at 9:45 am
Thank you for posting your mushroom hunting adventures. I miss those days. Great photos! Eat a few for me:)
DessertForTwo says:
May 7, 2010 at 10:22 am
Yum! What a fun family activity!
Valerie says:
May 7, 2010 at 11:18 am
I love mushrooms, but I’ve never had the good fortune to try morels. I have not seen them in the stores where I live (Western Massachusetts), but I’ll try to find some soon!
I’ve only just been pointed to your site, and I browsed through some of your older posts. Oh MY but your photography is lovely! And your recipes look so good. I can’t tell you how many I’ve filed away in all my recipe bookmarks. And through it all your style is elegantly simple and comforting, both in substance and writing. Very well done. I look forward to following you.
joanne says:
May 7, 2010 at 12:48 pm
wow! those are some beautiful mushrooms!! i love your blog, such yummy recipes! thanks for sharing…joanne
Keren says:
May 7, 2010 at 5:35 pm
Wow, you found alot! My Mom and Dad went looking for them and found a grand total of two.
Jessy says:
May 7, 2010 at 9:40 pm
Such a brave young woman, hunting for mushrooms in the wild! We had some mushrooms in the woods near our home (we were looking for morels, but didn’t find any  🙁 ) We did come across some gigantic ones, however, larger than a basketball! We had no idea what they were but when we came home we looked them up online and found they were called “giant puffball.” They’re said to be delicious. Have you ever tried them?
Jim-49 says:
May 8, 2010 at 5:45 am
“Oh My”,bringing back memories!! I was on a job in Southern Ohio,and a friend,said lets go get some of these wonderful things.I had never hunted these before,so we went up to his daddy’s house,and found 2 large grociery bags,they were great!! We,sliced them as you did,and put them in some salted cornmeal,and fried them,oh so good!!! Taste just like a southern favorite fish,the old mullet.The post sure stired old friendship,and a wonderful meal,”Thanks”!!
Jenn says:
May 8, 2010 at 4:41 pm
Hi Erica, Just found your wonderful blog through Tastespotting. What beautiful photos! Your food looks delicious and simple…I look forward to reading more!
Barbara @ VinoLuciStyle says:
May 8, 2010 at 6:20 pm
I love morel mushrooms although I haven’t had any in years. I recall the spring hunts we went on in Michigan when my ex-husband and I would visit his family.
Before then, whenever I heard about people hunting for mushrooms I was not interested, never sure of whether one would be poisonous or not. But look at those things…they are hard to spot they are so unique in appearance.
True story…so abundant that they were available fried at the local A&W Root Beer stand…now to get them I would have to pay $40/lb. Think I’ll just have to keep the memory.
Kaitlin says:
May 8, 2010 at 7:21 pm
I am SO jealous! My brother and I went out looking for morels today but didn’t find any.
We did get a bag full of asparagus, though. YAY!
This sounds amazing right now. I love your photos, too!
Ellie says:
May 8, 2010 at 11:17 pm
What fun it is to hunt for your own mushrooms! Life little pleasures.
helsbells says: May 9, 2010 at 1:41 pmHi, I really like your blog, I think the granola recipe looks delicious, can’t wait to give it a try.

Hey there! I also discovered your blog through Tastespotting. I bought some morels from the grocery store recently (at $40 a pound!) and read that I should cut them in half, soak them, and then rinse them. I rinsed them pretty thoroughly to remove all of the sand and dirt, but when I took a bite of the cooked morels, they were still realllly gritty. I was so bummed and had to throw them out. Any help would be awesome!

Erica Lea says:
May 10, 2010 at 6:33 pm
Thank you all for your very kind words.
Jessy: No I have never tried puffballs, but I think I’ve heard they’re good.
Jim: Hmmm…dipped in cornmeal & fried sounds delicious.
Miranda: We’ve had that happen to us as well. Your mushroom were probably not harvested correctly. Dad makes sure we break the mushrooms off above the ground so we don’t get any dirt. Other than rinsing them really well, I don’t know what you could do to get rid of that grit.

Elizabeth says:
May 11, 2010 at 9:05 am
Jessy, my grandpa tells stories of eating puffballs when he was a boy. At that time, his father was ill and money was super-tight around the farm – puffballs were free and filling. He says his mother fried them up in butter, much like you would eggplant. Just be sure the puffballs are nice and young when you pick them – if there’s any tinge of yellow to the flesh, you’re too late.

Daniel Klein says:
November 21, 2010 at 9:14 am
Beautiful pictures, how I would like to get in on that bowl of morels. now that its so cold, its hard to imagine going out to pick mushrooms. Thought you might be interested in this video I did on morels http://bit.ly/8Yrcby -there’s another about chantarelles too, have you picked them before? soooo good. thanks for your work.
daniel

ashleyenfrance says:
March 10, 2011 at 3:00 pm
In France these precious mushrooms are 30€ a kilo, so precious indeed. Also, another good way of eatting them is to cook them with butter, garlic, and parsley. Then add sea salt at the end.

Hello! I’m Erica Lea. I’m a mom of three living in northern Minnesota (AKA The Frozen North). Here on Buttered Side Up I share recipes I have tried & modified (to be a tad healthier) and found to be delicious. My main focus is recipes with a healthy touch. You’ll find that I like to substitute organic unrefined ingredients quite often. But you won’t find that I skimp on good, natural fat. Butter > margarine.